These sections will detail use of the Docker Hub client for sregistry, which is a connection to the default Docker Hub API. This Docker client is also used (and extended) by other clients (e.g., Nvidia Container Cloud). 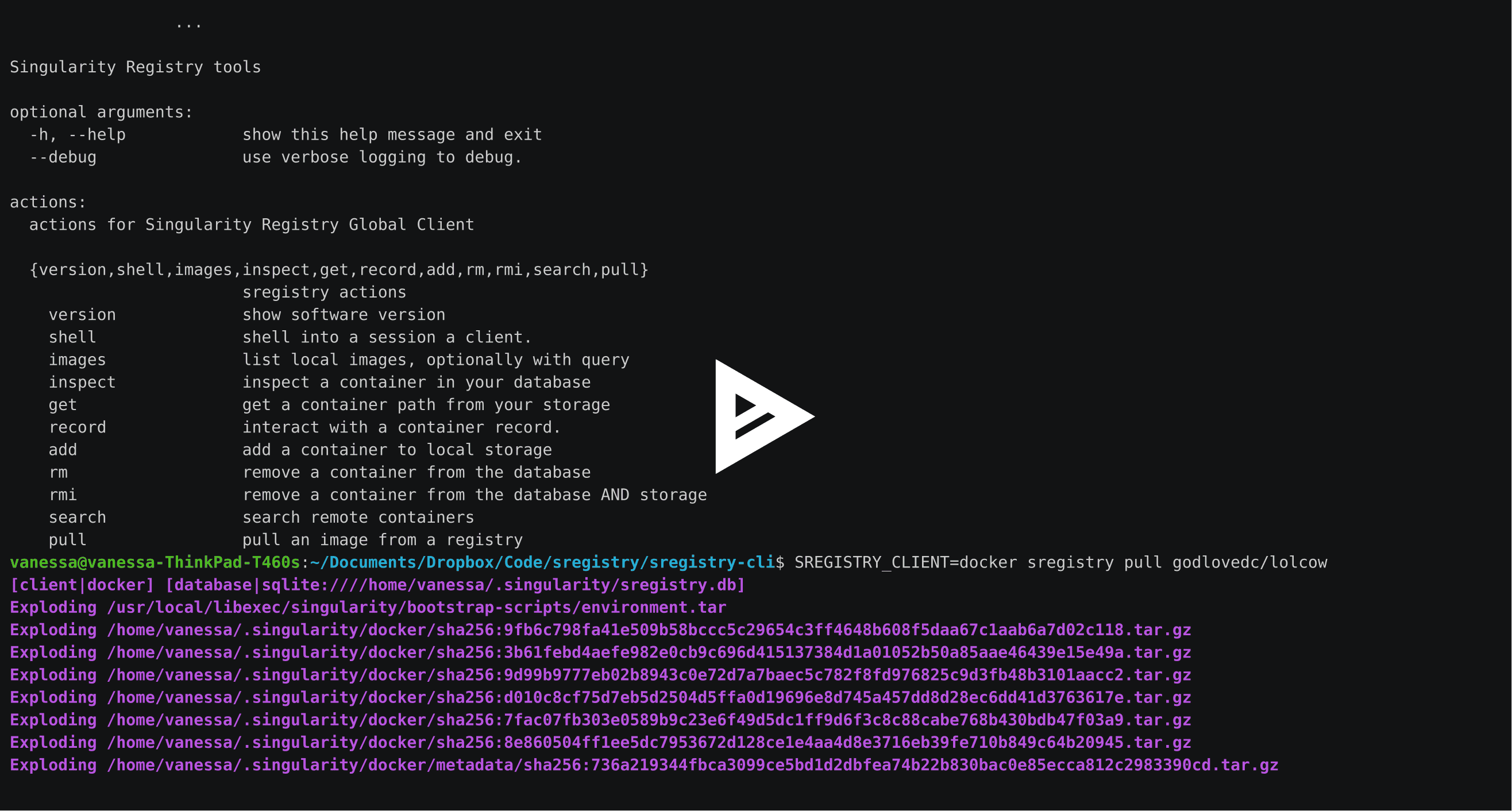 Why would I want to use this?

Singularity proper will be the best solution if you want to pull and otherwise interact with Docker images. However, under the circumstance that you want additional behavior or features not yet implemented in Singularity:

To quicky review, using this client (for pull) you will do the following:

The “images” from Docker Hub are layers, and the layers that you obtain depend on the uri that you ask for, along with the host architecture and operating system. See the environment. setting for more details.

The Docker Hub module does not require any extra dependencies other than having Singularity on the host.

To get started, you simply need to install the sregistry client:

The next steps we will take are to first set up authentication and other environment variables of interest, and then review the basic usage.

The following variables are relevant for clients that use multiprocessing:

The following variables are shared between different sregistry clients that have a Docker registry backend.

The following variables are specific to Singularity (not the Singularity Registry Global Client) and honored during a Docker Hub pull:

You will notice in the above table that you have multiple options for authenticating with Docker Hub. We recommend that you use the standard docker credential file (generated with docker login that is usually located at $HOME/.docker/config.json with your secrets token. To do this:

As an alternative option, you can also choose to export your username and password, and the client will do the same to base64 encode them (this is the token in the docker config file. Whatever you choose, we do not send your username and password out in the open beyond the client (or cache it anywhere) but instead generate a base64 encoded string to pass with the header to identify you and ask for a token. Important sregistry will not cache or otherwise save any of your credential information to the .sregistry secrets. This information must be set in the environment (either the path to the file or username and password) for each usage of the client.

For a detailed list of other (default) environment variables and settings that you can configure, see the getting started pages. For the globally shared commands (e.g., “add”, “get”, “inspect,” “images,” and any others that are defined for all clients) see the commands documentation. Here we will review the set of commands that are specific to the sregistry Docker Hub client.

For all of the examples below, we will export our client preference to be docker

but note that you could just as easily define the variable for one command:

or do away the need to export this environment variable by simply activating the client:

After we have exported SREGISTRY_CLIENT above, if you are looking to interact with a shell for the Docker Hub sregistry client, just ask for it:

The most likely action you want to do with a Docker Hub endpoint is to pull. Pull in this context is different than a pull from Singularity Registry, because we aren’t pulling an entire, pre-built image - we are assembling layers at pull time and building an image with them. Specifically we:

If you are interested in seeing how to ask for a particular architecture or operating system (given that the image provides it) please see the environment. setting for more details. Here is an example of using the Docker Hub sregistry client.

Notice that the first layer extracted is the standard environment metadata tar. The next set of layers come from the user’s default cache (either set as the Singularity default or a user specified, we honor the Singularity envionment variable settings for this, and use a temporary directory if it’s disabled. The final layer is a metadata tar that is specifically for the runscript, environment, and labels (if found in the manifest). After you do a pull, you can see the record in your local database (see the last record):

Here is an example of a typical flow to download an image, and then use it. We will set the client at runtime to be Docker Hub (and not the default of Singularity Hub)

Check out our debugging and support page if you run into issues and need to debug or get help.